This week there was a great deal of economic volatility amid a large number of government reports indicating that the economic recovery is much more pessimistic than previously thought.  Despite new home sales being at their lowest level since 1963, US jobless claims and durable goods orders were much better than expected. US initial jobless claims fell from a previous level of 472,000 to 457,000. This number tends to fluctuate from month to month but it has yet to reach its February peak of 495,000. Private sector employment is still weak and businesses are still reluctant to hire. The FOMC stated this week that they will continue to keep rates at a record low of .25% because of weakness in the housing sector and constrained household spending caused by tight credit and oversees developments in European financial markets. The Fed also has changed its tone slightly by announcing that “financial conditions have become less supportive of economic growth.”

Durable goods orders also fell in the month of May by -1.4% from the prior revised April figure of 3%. When excluding transportation orders, a highly volatile metric, durable goods orders excluding transportation actually climbed from a low of -1% to .9%. This is in line with a FOMC statement which indicated that “business spending including equipment and software has risen significantly.” This week Caterpillar’s (NYSE: CAT) CEO James Owens stated publically that the company is expecting revenue to rise by 25%. This large increase in revenue is attributed to a 65% increase in exports which have been in a high demand since the onset of the natural disasters in South America and the Caribbean. Caterpillar stock price has risen almost 27% on greater demand from emerging markets and countries afflicted by natural disasters. 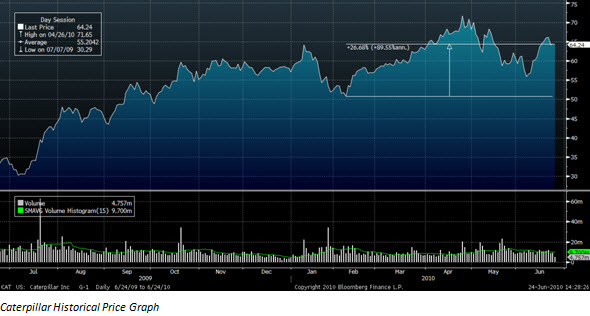 This week was filled with economic data, especially in the housing sector. As the week began, the market started with a jump from last Friday’s close in anticipation of data that was to be released. After a very brief move higher, the market grinded lower throughout the week, riding the negative housing data, and finally closing at a near 5% loss for the week by Thursday. Despite historically low financing rates on mortgages (average 4.75% 30 year fixed yield), and the $8,000 tax credit incentive (which is expiring soon), the housing data released for the week was awful. Existing home sales lost 2.2% month-over-month, much less than the expect 6% rise. MBA Mortgage Applications for the week decreased by about 6% after gaining 18% in the prior period. As if these numbers weren’t bad enough, the New Home Sales Index dropped 33%, to an all time low in the index. With the unemployment rate still high and corporations still worried about future economic prospects in the US, it is hard to tell when one of the most important markets in the US (housing) will finally find a base.

Chinese authorities announced late last week that they would allow some flexibility in the exchange rate peg between the Yuan and the Dollar.  This has long been a source of friction between the United States Government and the Chinese government. The Yuan has been kept artificially low through its peg to the U.S dollar which has resulted in large trade deficits in the United States. Critics say that the peg has caused U.S based manufacturing companies to leave the United States in search of cheaper costs of labor and as a result there have been outflows of domestic jobs. However, this argument made by critics and advocates of protectionism has been refuted various times by Milton Freidman in both “Free to Choose” and “Capitalism and Freedom”.  The argument against protectionism stems from the reality that any form of protectionism, whether it is in the form of a peg or a tariff, imposes a cost on the domestic base of the home country. In other words, the Chinese government has been largely subsidizing American consumption. Conversely the American consumer has been receiving the benefits of this subsidy whereas the Chinese consumer has felt the opposite effect.  So the reality is when American manufacturing does decrease, American consumption will decrease as well and the roles will begin to reverse again. China who is largely reliant on American consumption will have to look somewhere else for growth and the United States will have to take the opportunity to rebuild its manufacturing base and increase efficiency internally.

Of course, this is a very simplified explanation of the current situation.  In reality the United States is largely in debt to China. As a result, China has been propping up American consumption and the exchange rate for years during which American standards of living have increased and a service based economy has developed. Should the Chinese choose to stop buying US debt, credit would dry and it would be near impossible for an up and coming entrepreneur to start up any type of business. The other complicating factors include the idea that The Government will intervene and cause inefficiencies with the free market process. History is filled with instances where government intervention caused rather than solved widespread economic troubles.  Finally, assuming that the American manufacturing base was able to restart and begin on its path to recovery, over-unionization makes the point at which the American manufacturer is able to break even, not even relatively close to competitive in the global market.  While the last two could theoretically be fixed, the debt issue is the most pressing and most challenging to overcome. This recent move by the Chinese authorities to relax the exchange rate and allow the Yuan to free float within a range of values indicates that the Chinese know what Americans are choosing to ignore. Namely that, American economic issues are pervasive and cannot be easily solved. It seems that China will look to develop growth internally and become more independent of the American consumer.

Vietnam has been aggressively lowering tariffs and improving its infrastructure in a hope to attract investments that otherwise might go to India and China. With the rising wages and labor strife in these countries, which are the favored destinations for FDI in Asia, MNC’s worldwide are taking a serious look at Vietnam as a low cost alternative for new factories and call centers.

This is not the first time that Vietnam has been projecting itself to be cheaper than its neighbors in an aim to lure foreign investment. In 1994, after the end of the U.S. trade embargo, there was a rush of companies such as Coca-Cola and P&G into Vietnam which backfired due to the reigning bureaucracy and corruption in the country. However, this time the government has strived to move more decisively with tax cuts such as reduction of import duties on computer parts, improvements in the country’s infrastructure including better roads, ports, new nuclear power plants, high speed train lines and the like. The leadership of President Nguyen Minh Triet’s also vows to eliminate the notorious red tape prevalent in the country that has frustrated investors in the past.

Vietnam, with its $96 billion economy and with the youngest workforces in the world had managed to gain membership in the World Trade Organization in 2007. Currently, the US is its biggest overseas market with last year’s exports amounting up to $12.3 billion. Moreover, FDI in the country is on the rise now with Intel opening up a $1 billion chip assembly and test plant and Taiwan- based PC manufacturer Compal coming up with a new factory. Also, political tensions that were mounting in Thailand are leading companies into Vietnam as an alternative.

However, even though costs and wages have gone up in China’s “Pearl River Delta”, companies can acquire goods from factories in other less expensive parts of the country, given China’s economic scale and far more advanced infrastructure. Thus, the Vietnamese government has spent a substantial amount to build new highways connecting northern Vietnam to southern China in an attempt to enable Vietnamese factories to become an integral part of the Chinese supply chain more easily via these roads.