Fed Gears Up for Stimulus 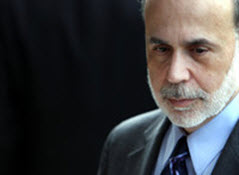 For the second time since he became chairman in 2006, Ben S. Bernanke is leading the Federal Reserve into uncharted monetary territory.

The Federal Reserve is close to embarking on another round of monetary stimulus next week, against the backdrop of a weak economy and low inflation—and despite doubts about the wisdom and efficacy of the policy among economists and some of the Fed’s own decision makers.

Bernanke next week is likely to preside over a decision to launch another round of large-scale asset purchases after deploying $1.7 trillion to pull the economy out of the financial crisis, comments from policy makers over the past week indicate. This time, with interest rates already near zero, the Fed will be aiming to increase the rate of inflation and reduce the cost of borrowing in real terms. The goal is to unlock consumer spending and jump-start an economy that’s growing too slowly to push unemployment lower.

Throughout the week, Morgan Stanley and RBS have reported optimistic sales forecast for the upcoming holiday season. A main reason for this has been the vast decrease in the claims for jobless benefits of around 21,000 this past week. The decrease amounts to a total of 4.36 million people, the lowest number reported since November 2008. This seems to be an indicator that the U.S labor market may be starting to improve.

Another important indicator that gauges the strength of the labor market is labor retention. According to John Herrmann from State Street Global Markets LLC in Boston, “That extra labor retention could bolster confidence and lead to a further strengthening of chain-store sales” heading into the holidays.

Recently, many companies have seen their sales exceeding expectations and are hence planning to add more workers. Such is the case of Ford Motor Company, who reported an increase in sales of 15.1% from 13% this quarter and has also announced new plans to create 1200 jobs in Michigan by the year 2013. Since the US is predominantly a consumption-based economy, it seems this positive economic data demonstrates that the nascent economic recovery is strengthening.