The Financial Crisis Inquiry Commission was created in the wake of a harsh crisis that occurred in 2007 & 2008. This ten-member commission, appointed by the United States government, is responsible for conducting hearings of Wall Street firms, rating agencies, and government officials. As reported in the commission’s statutory mandate, “F.C.I.C.’s goal is to examine the causes, domestic and global, of the current financial economic crisis in the United States.”

One central topic the F.C.I.C. has focused on is the reliability and dependability of rating agencies. Many government regulators have been advocating rating agency reform; the FCIC has called on the rating agencies and its top executives to come up with answers that better elucidate the root causes of the recent credit crisis. Issues surrounding the ratings of mortgage backed-securities (MBS), a driver of the massive losses large banks and investors suffered, given from top firms such as Standard & Poor and Moody’s is a big topic scrutinized by F.C.I.C. A common practice before the credit crisis was to rate bundles of MBS’s connected to homeowners with less then 5% of equity vested with AAA ratings. These MBS’s were essentially granted the equivalent degree of safety as a US-backed Treasury bond. The F.C.I.C. seeks probe rating agency officials to see exactly why regulations already in place could not correctly determine the quality of debt properly.

This week brought mixed results from an interview with Brain Clarkson. Mr. Clarkson, serving as an executive at Moody’s Investor Services division until 2008, had a long career spanning over 16 years with the firm. A testimony the government released earlier in the week provided no concrete evidence of negligence on his or his team’s part; however, one common response recurred, “I do not recall” as reported by Ben Protess from DealBook.com. Sadly during this private testimony, Mr. Clarkson could not even remember his own goals that he had set upon being promoted to a top executive position. As the testimony progressed, it was very clear that this executive was candidly “unapologetic” in his responses.

This testimony, although not a complete success, does prove that many obstacles have yet to reveal themselves to the F.C.I.C. Mr. Clarkson did not show willingness to contribute to the current investigation. Officials in credit rating agencies may have practiced corruption that eventually played a large role in the meltdown that occurred in 2008. Since President Obama signed the new commission into action, we have seen attempts such as this recent testimony to uncover the legitimacy in our defected financial structure. We will see more reports released in the coming year of actions, inactions, and misjudgments of related banks, regulators, and rating agencies tied to our credit crisis; a crisis that still leaves over twenty million Americans unemployed.

The Unrest in Libya and Rising Oil Prices

The biggest story on Wall Street this week has been the surge in oil prices to levels not seen since 2008. Beginning Wednesday, crude oil briefly exceeded $100 a barrel due to the ongoing unrest in the Middle East and in particular Libya. Protests in Libya calling for the resignation of Moammar Gadhafi have resulted in chaos and violence inside the country and led multinational oil companies to cut production and evacuate employees as quickly as possible. Analysts disagree over the amount of lost production with estimates ranging from 50,000 to as many as 1 million barrels a day of Libyan oil removed from world markets.

Exactly how much does this lost production in Libya effect world oil prices? While Libya is the third largest oil producer in Africa, it is ranked 15th in the world and accounts for less than 2% of the total world supply. What does make the Libyan oil important is its quality, low density and low sulfur content which is preferred by refiners. A drop in Libyan production would have the most immediate effect on prices in Europe, which consumes 85% of Libyan exports. In an effort to reassure world markets, Saudi Arabia announced Thursday that OPEC members are willing and able to replace any oil supplies lost due to Libya. Saudi officials went so far as to say that there is no reason for prices to rise and that they will not allow shortages in supply to exist going forward. According to Bloomberg estimates, OPEC collectively pumped 29.4 million barrels a day last month and currently has about 5 million barrels a day in spare capacity.

Perhaps the single best explanation for the dramatic rise in crude prices is the ongoing uncertainty in the region and the threat of protests disrupting oil production in neighboring Arab countries, most notably Algeria. Algeria currently produces 1.25 million barrels per day and has seen protests recently calling for the resignation of President Abdelaziz Bouteflika who has been in power since 1999. Investors are also monitoring developments from protests in Yemen, Bahrain and Iran with the concern that higher oil prices in the US will increase transportation costs and could potentially become a serious obstacle for the economic recovery. Stocks and the dollar have slid throughout the week while oil and precious metals have seen strong gains.

The Swiss franc gained against most major currencies this week. Risk aversion continues to be a leading indicator of price action in the Forex market as the Swiss franc continues to show its strength during a time of uncertainty. The political unrest that ensued in Tunisia, Egypt, Iran, and now Libya, has contributed significantly to this uncertainty. Worries of Middle East oil production slowing, debt contagion in Europe, and instability of commodity prices have also impacted Forex market price action. Commodity currencies (AUD, CAD, NZD, ZAR) have all endured volatile price action this week. The EUR/CHF, USD/CHF, and CAD/CHF all tested this week’s support levels.

Since Feb. 11th, the EUR/CHF has seen a consistent downward trend with a fall from a Feb. 11th, 2011 high of 1.1386 to 1.2776 on Friday. The Feb. 25th trend index shows a strongly bearish EUR/CHF that remains to be extremely oversold. This trend eased in early Friday trading, but showed no immediate indications of a rebound. The Fibonacci retracements below show the EUR/CHF testing the support level on Friday. 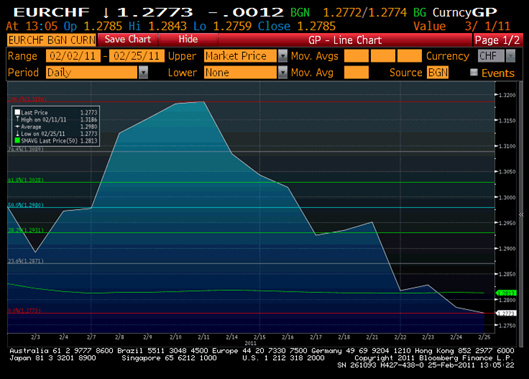 The USD/CHF has gone through a similar bearish trend as that of the EUR/CHF, showing the CHF’s resilience against the world’s major currencies. However, the USD/CHF on Thursday began to pair some of its losses with a slightly bullish trend. A rebound from the month’s low of .9264 shows increased confidence in the greenback, another safe haven currency along with the CHF and JPY. Increased U.S. consumer confidence and a better than expected decrease in U.S. jobless claims can reassure the greenback’s bulls. Bullish investors will be looking for future positive U.S. economic outlook and a waning of worries regarding slowed oil production (easing of inflated oil prices) in order to correct USD/CHF downward pressure. 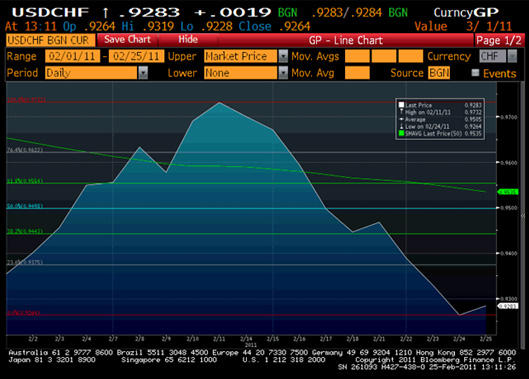