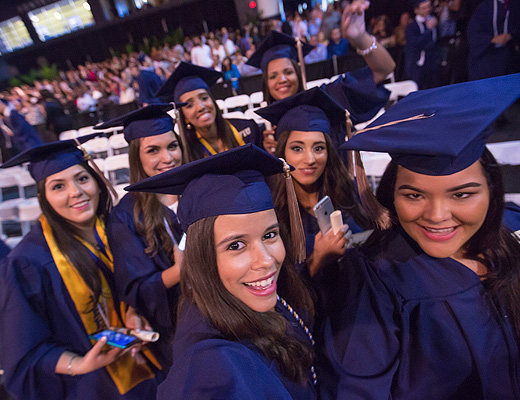 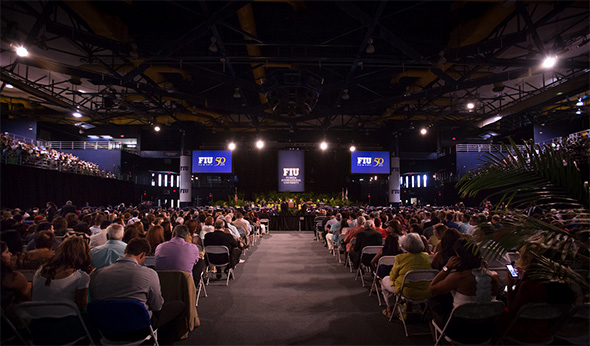 Hearty congratulations – and many tears of pride and joy – were part of the commencement ceremonies for Florida International University (FIU) at the FIU Arena on Tuesday, August 4, 2015. Family and friends were on hand as President Mark B. Rosenberg and Acting Dean Jose Aldrich recognized 1,014 students in the College of Business who earned a degree.

These graduates were among 3,620 students who will be receiving degrees this summer, a new record for summer commencement at FIU.

At the afternoon commencement ceremony, 489 students from the R. Kirk Landon Undergraduate School of Business were graduated. At the evening commencement ceremony the same day, 523 students from the Alvah H. Chapman Jr. Graduate School of Business were honored for earning their Master’s Degree. Two students were awarded a Doctor of Philosophy degree in Business Administration: Izhar Haq and Ying Liu.

Since 2010, FIU has recognized students who exemplify the “Worlds Ahead” philosophy of the university. At the Summer 2015 Commencement, two students from the College of Business received Worlds Ahead recognition:

Stephin Janis (MACC ’15, BACC ’13), at the age of eight, moved with his family to the U.S. from India. He eventually came to FIU and became president of Beta Alpha Psi, leading the organization to be recognized as the most active business organization on campus and to win national recognition. Janis earned his Bachelor’s Degree in accounting with a 3.98 GPA and became the first FIU student to win a $10,000 merit scholarship from the PCAOB (Public Company Accounting Oversight Board). As a graduate student, Janis completed an audit internship with EY (Ernst and Young LLP), earned a 4.0 GPA and tutored undergraduate accounting students. After graduation, he will join the assurance practice of EY’s Miami office.

Angelica Maria Guardia Sinclair (MBA ’15), named as class representative of the 48 cohorts in her MBA program, organized team-building activities as well as get-togethers with other cohort groups. While earning a 3.85 GPA, Guardia became involved with the National Society of Hispanic MBAs and received their scholarship to attend their national conference in Philadelphia. In 2013, Guardia became the youngest board member — serving as Vice President of Communications and Outreach — on the U.S. National Committee for U.N. Women. She still holds office, and has assisted in creating a chapter of that organization at FIU. Guardia also assisted start-ups and non-profits. She hopes to secure a position with Jarden Corporation, where she completed an internship, and eventually head up her own consulting company. 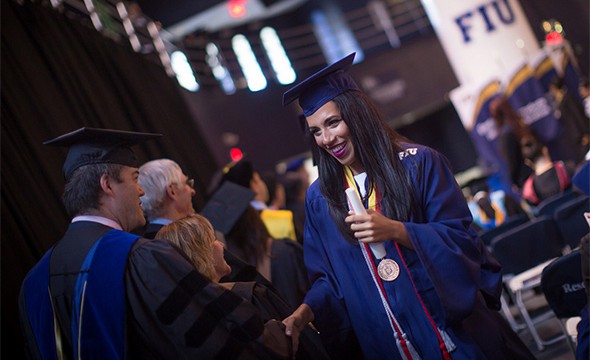 Sayed Mohammad Reza Afjei (PhD ’15), who received his PhD in Business Administration & Management, is a graduate teaching assistant in the Management and International Business department.

Staci Bernhard (MS ’15, BS ’08), who earned her Master’s Degree in Higher Education Administration, is employed by the Chapman Graduate School of Business in the office of Admissions, Recruitment and Financial Aid.

Izhar Haq (PhD ’15) received his PhD in Business Administration. He is a senior associate controller in FIU’s Controller’s Office and an adjunct faculty member in the School of Accounting.

Ying Liu (PhD ’15), who received her PhD in Business Administration, is a graduate teaching assistant in the Management and International Business Department. In the fall she will be employed at the Questrom School of Business at Boston University as a post-doctoral associate.

Alexa Llosa (BS ’15) is a student assistant in the School of Accounting. She received a Bachelor of Science degree in business administration.