Similarly, consumer confidence as measured by The University of Michigan also had an unexpected downturn earlier this month from 74.4 in the previous period to 73.7. The median estimate of the 74 economists surveyed by Bloomberg was an increase to 75 points. It seems that the American consumer is still experiencing a substantial amount of economic hardship. Bob Willis from Bloomberg press believes that “Americans, shaken by the loss of 8.4 million jobs during the recession, will probably be slow to regain the confidence needed to spearhead the next phase of the recovery”. Even so, quarterly personal consumption numbers taken from the Bureau of Economic Analysis suggest that Americans have increased their spending since March of 2009. Should the trend continue, personal consumption levels will be back to where they were at the beginning of 2008 by beginning of 2011.

Even though there has been a recent downturn in both of the aforementioned economic indicators, the overall trend has been positive since March. 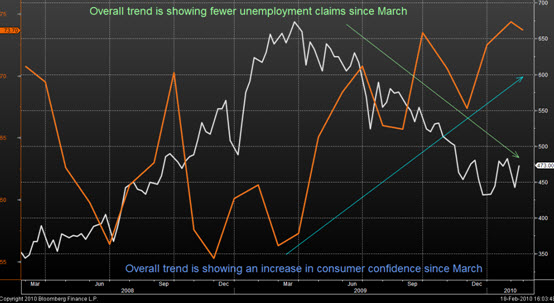 This week, foreign demand for U.S. Treasury securities fell by the largest amount on record in December with China reducing its holdings by $34.2 billion. The Treasury Department has reported that foreign holdings of U.S. Treasury securities fell by $53 billion in December, surpassing the previous record of a $44.5 billion drop in April 2009. China cut its holdings by $34.2 billion to $755.4 billion, losing the top spot in terms of foreign ownership of Treasurys to Japan, which has also cut exposure, reducing it holdings of Treasurys by $11.5 billion to $768.8 billion, a much slower pace than China. Overall, the Treasury Department said that foreign net purchases of long-term securities totaled $63.3 billion in December, down from $126.4 billion in November which covers Treasury securities and private company bonds.

In fact, China’s holdings are a result of the huge trade deficits the United States runs with China. The Chinese take the dollars Americans pay for Chinese products and invest them in Treasury securities and other dollar-denominated assets. Hence, American manufacturers argue that China’s huge dollar reserve reflect a strategy by the Chinese government to keep its currency relatively low against the dollar as a way to boost Chinese exports and dampen demand in China for American products.

However, the reductions in holdings, if they continue, could force the government to make higher interest payments at a time that it is running record federal deficits. Subsequently, the Obama administration had released a new budget plan earlier this month which projects that the deficit for this year will total a record $1.56 trillion, surpassing last year’s record of $1.4 trillion deficit. The trillion-dollar-plus deficit have been caused by a deep recession, which has reduced government tax receipts, and the massive spending that has been undertaken to jump-start the economy and stabilize the financial system.

Thus, it seems that the current trend of unloading U.S. government debt is likely to continue, not only by key players such as China and Japan; but just as about everyone else will be lightening up on U.S. treasury holdings for a while.

The Leading Economic Index rose for the month of January by 0.30%. This was less than the anticipated 0.50% increase, expected using the median of 58 analyst estimates in a Bloomberg News survey. As reported by The Conference Board, 5 out of the 10 indicators that the index is composed of increased in the most recent month’s survey. The increasing indicators were: the interest rate spread, the index of supplier deliveries, average weekly manufacturing hours, stock prices, and the index of consumer expectations. These positive indicators offset the negative growing indicators which included things like real money supply and claims for unemployment insurance.

This is the tenth straight month that the Leading Economic Indicator Index has risen, currently standing at 107.4. The index is supposed to measure the outlook for the US economy for the next 3 to 6 months. The last growth rate (December) for the index was 1.2%, meaning it is growing a decreasing rate. So although the index is pointing to a growing economy, it should be noted that for January’s data, the rate of growth was not only slower, but also below expectations. 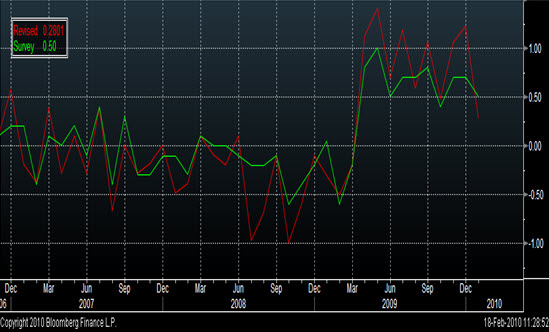 Released Wednesday Feb. 17, minutes of the Fed’s meeting showed that the discount rate, the interest rate on emergency loans the Fed loans to banks, now at 0.5% will be increased towards the end of 2010 and the maturity of loans to overnight will be reduced from the 28 day period. Emphasizing that the desire of such a move is not to tighten credit, officials have stressed the need to lessen incentives for coming to the Fed for emergency loans; it would re-establish a penalty for these actions.

Officials are still debating the need to tighten credit and reduce the portfolio of mortgage-back securities. Forecasts by the Fed for inflation-adjusted growth were between 2.8% and 3.5% in 2010 4% in 2011 and 2012. Expectations of inflation remained subdued and the unemployment rate, now at 9.7%, to remain constant for the rest of the year to then drop to 8.5% in late 2011 and between 6.6% and 7.5% in 2012.

Although household inflation expectations were stable, some concern over the risk of medium-term inflation still circulates. Additionally, because unemployment benefits have been extended, jobless workers have less incentive to look for jobs or leave the labor force; this in turn is skewing unemployment figures. Debates over selling off mortgage-backed securities “in the near future” are also loomed and are regarded as a move not to be done too quickly. Removing $1.43 trillion of housing debt from the Fed balance sheet will prove to be a challenge.

Good news on the U.S economy and signals from the Fed to tightening monetary policy has sent the dollar, stocks, and commodities on a rise. This also sent bond yields higher.  As positive economic data continues to outperform and real interest rates are shooting higher than in Europe, the dollar continues to gain a boost as investors flock to U.S assets. The Euro Zone shows heavy levels of uncertainty, as member nations struggle with high debt loads.