This week the NAR (National Association of Realtors) released the July data for existing home sales – which are completed transactions that include single-family, townhomes, condominiums and co-ops. The number came out much lower than expected at 3.83 million units sold versus the estimated 4.65 million, and below the lower end of the estimated range of 3.91 m – 5.2 m. The July reading was 27.2% lower than the previous month of 5.26 million units and was 25% lower than July of 2009. Total existing home sales for July are at the lowest level since 1999, which is when the NAR began calculating the series data. Although these numbers were much worse than expected, a decline in home sales was anticipated to come following the housing tax credit expiration in May. The NAR mentioned in their report that now is a great opportunity to buy a home, with prices so low and mortgage rates at record lows (about 4.5%, 30 year conventional fixed rate). However with so much uncertainty still looming in the economy and with so many Americans still unemployed and unable to pay their mortgage, it is difficult for many to see the light at the end of the US housing tunnel.

On August 26, 2010, Cisco Systems (NASDAQ:CSCO) announced its intention to acquire a privately-held firm ExtendMedia for an undisclosed amount. The firm was founded in 1991 and provides a variety of content management software for firms seeking to optimize their delivery of video services and for facilitating video advertising. In a press release, Enrique Rodriguez, Cisco’s senior vice president and general manager, commented that “[the purchase of] ExtendMedia will strengthen Cisco’s position in the delivery of IP video services.” Extend Media’s software is used for integrating multiple platforms of video services-such as television, cell phones, and computers- under one program that allows for multiple streaming. ExtendMedia’s frontrunner software OpenCASE is designed to grant the user control over multiple aspects of the content streaming lifecycle.

The amount of the transaction is likely to be negligible relative to the cash that Cisco has on its books. Cisco has experienced a steady increase in the amount of cash or near cash equivalents on its balance sheet. Part of the reason that CISCO is engaging in this venture is because ExtendMedia is a play for future growth as content management services experience a steady increase in the demand; however, there has been a trend forming recently among large firms to engage in acquisitions. This trend can be seen with Dell’s purchase of 3Par, Intel buying Mcafee, and Merrex Gold Incorporated‘s 50% purchase of Frontline’s Jubilee project. Firms appear to be factoring in weak demand going forward and a massive buildup of cash. With very little organic growth occurring, many companies have turned to accretive M&A to boost earnings. Cisco’s balance sheet demonstrates the underlying trend in occurring across all firms. Over the last few months, the economy has continued to demonstrate weakness which further supports the argument that firms have no other recourse but turn to acquisitions for eps growth.

The Week of Recalls

In the healthcare sector, a new quality problem has arisen for Johnson & Johnson’s division of orthopedic-device units with a recall of hip replacement parts that were implanted in more than 90,000 people worldwide. The recalled device, called the ASR XL Acetabular System is the cup portion of the hip joint replacement and the reason for its recall is due to a high rate of repeat surgeries required by the patients. The recall does not require patients to have implants removed, but to be checked by their surgeons for evaluation of device performance. However, even though JNJ would cover all ‘reasonable and customary costs’ linked to the recall, the company is still evaluating the financial impact of this recall and has not announced its amount of losses. Moreover, this announcement of recall comes on the heels of a recent FDA warning letter to DePuy, who were marketing some different replacement joint products without prior approval.

In the automotive sector, the world’s biggest carmaker Toyota announced that it would recall 1.1 million 2005-2008 Toyota Corolla and Corolla Matrix model vehicles in order to address a problem with the electronic control units in the engine called the engine control module that may have been improperly manufactured and could cause the cars to stall. This latest action brings the number of Toyota vehicles recalled to up to 10 million worldwide last year, which is approximately the number of cars sold in America this year by all manufacturers. These repeated recalls have hurt Toyota’s reputation, with its market share in the U.S. dropping from 16.3% to 15.2% this year, tumbling to third place behind General Motors Co. and Ford Motor Co. in the U.S. auto market.

Moreover, Garmin is voluntarily recalling around 800,000 Nuvi personal navigation devices sold in the U.S due to their potential to overheat. They are recalling 1.25 million units worldwide due to this reason, and have currently ceased sale of these models. The PCB (printed circuit board) design, along with the third party supplier batteries’ interaction in rare circumstances would increase the possibility of overheating, which may result in a fire hazard. Garmin’s battery supplier has agreed to share the costs of the entire recall program.

2010 has been a difficult year for many of the major world equity indices. The major indices that cover the United States, Japan, and other industrialized European countries have all declined in value. Japan, for instance, has had a substantial contraction this year with more than a 15% declines YTD in the Nikkei index. The classic emerging economies have also seen declines. The Bovespa, Hang Seng and the Mexican IPC index have all had over 2% declines YTD. In contrast, many newly emerging economies, with developing markets, have seen record gains. Jakarta, Malaysia, Thailand, Costa Rica and the Philippines have all had double digit returns. Globally, investors seem to be divided; there is still a class of investors that is still seeking high yields and this might explain the boom in newly emerging economies.

In the United States, the perception seems to be that the equity markets are risky again. With memories of 2008 still fresh in the minds of wealth managers, capital preservation has taken precedence over total return strategies. The net asset value of bond funds continue to rise, the yield curve continues to flatten across different maturities, and more noticeable is the spread between 10 year treasuries and 2 year treasuries which continues to narrow each day. These are all indications that the investors believe the equity markets have become riskier. The perception is flawed and irrational. Investors have escaped the risks associated with being in equities but have opened themselves up to interest rate risk, credit risk and inflation risk. Take Treasury securities for example; these instruments are viewed as risk-free because the government can debase its currency to meet its obligations. If the government chooses to debase its currency and meet its obligations, the risk of inflation and reinvestment risk rise rapidly. The concept of risk-free neglects the reality that governments can default and, in fact, they do so with regularity. 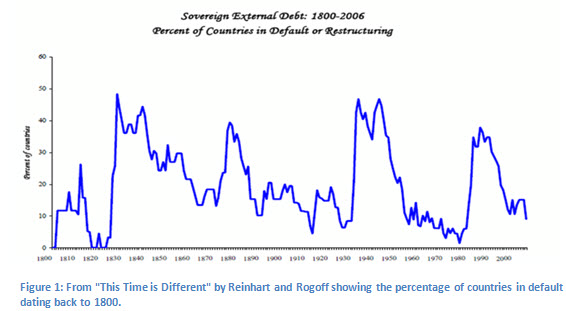 In “This Time is Different” Reinhart and Rogoff make a compelling case that high debt levels and inflation can be precursors to default. 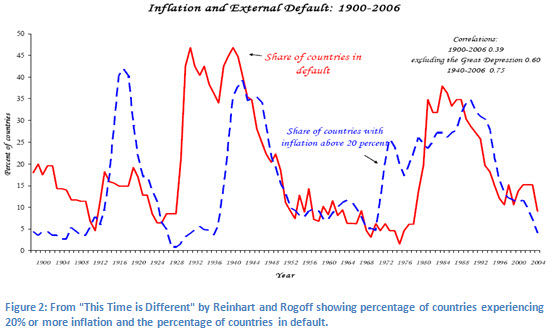 Even so, the same industrialized economies who have borrowed the most are being given some of the narrowest CDS spreads (insurance against default). Although the values of these instruments are constantly being determined through market forces, the default of the United States, Japan, and the United Kingdom are still relatively cheap to insure against.